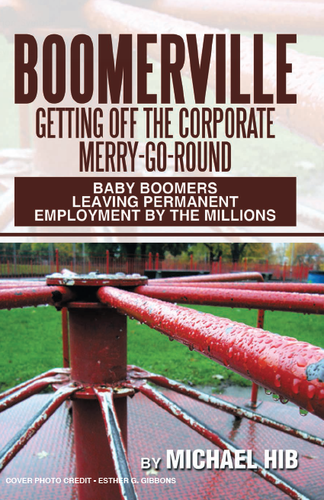 BOOMERVILLE: Getting off the Corporate Merry-Go-Round - Author Signed Hard Copy

May not be printed, copied or redistributed without specific written permission of the author.

Author Michael Hib has written in his new book ‘BOOMERVILLE: Getting off the Corporate Merry-Go-Round’ a perceptive new look into the roles of baby-boomers in tomorrow’s economy

We are gaining consensus from analysts, HCM practitioners and workforce consultants. The value of the extended 'Just-in-Time’ Workforce is emerging as the practical business model for the 21st Century Gig Economy. “Work force” is being redefined by a multi-generation, multi-culture core of high-performers (HI-POS) who will use the convergence of “cloud” services, cloud applications, data virtualization, handheld device mobility and the rate of social media acceptance around the world.

“Work” is being redefined in terms of how and where it can be accomplished. If an educated knowledge worker who is bilingual living in Bangladesh has a laptop, smartphone, a few cloud apps, and fast ISP he or she has a flatter global playing field and can be very completive very quickly at selling products and services globally. These qualified on-demand capabilities is growing rapidly in emerging markets as well.

In today’s ever-changing global economy very little is considered to be stable. It’s a blur of continuous change. Indeed the economic instability has affected everyone, and threatens the financial security of even the most financially stable. Added to such a list are members of the Baby- Boomer generation who were born after the Second World War and have reaped the economic and moral benefits of their generation. But with a huge majority of baby boomers, nearly 60 million, reaching retirement age and heading for the exit from permanent fulltime employment, the collective fates of all baby boomers seem uncertain. In “BOOMERVILLE: Getting Off the Corporate Merry-Go-Round” author Michael Hib has written a helpful guide on how the baby boomer generation can survive and thrive in the new “gig” economic arenas.

“BOOMERVILLE: Getting Off the Corporate Merry-Go-Round” shows how as millions of baby boomers may head toward new ventures or free-lancing their talent in a rapidly shrinking world in which everyone lives. Many more countries attempt to become an economic player and US competitor as the global economy emerges. Rapidly expanding technologies and communications are enabling more countries to become borderless within a global economic community of creative destruction—competitors on a global stage and 24 hour global clock. This highly informative book shows readers how millions of retiring baby boomers getting off the corporate merry-go-round will play a crucial role as freelancers and free agents in bridging the gaps in skills, talent, business wisdom, and sustainability.

There are really three narratives in this discussion about the shift in how work is done. The first is about the explosion of online staffing and temp project matching sites like oDesk and Elance, which recently struck a deal to merge. According to research from The Research Platform and Staffing Industry Magazine, more than 60 of these platforms for small gigs, mostly technical or task work, are bid on by members who give up a portion of the gig’s compensation for winning proposals which are chosen anonymously by the client. This market has grown substantial in the last few years, largely due to the economy’s shrinking jobs opportunities.

The third narrative, is about business owners and executives who see the opportunity to streamline their organization in a manner which takes advantage of both advances in handheld technology and the increases in available skills and expertise of a Just-in-Time [JiT] nature in a manner similar to the way sports coaches try to selectively match up talent against competitors on the field, court, and ice. This is obviously a more complex process than filling tasks with temps or outsourcing through procurement. This business model is driven by the explosion and convergence of technology making it possible to use and effectively gain a competitive advantage through utilization of non-employed JiT experts. This approach we have labeled the “blended workforce”. It is the selection of the right JiT expertise and skills blended with your “core” high-performance team which integrates as the whole team for the period of time -- where and when needed. Each engagement of these JiT knowledge workers is a fulfillment of a scope of work [SOW] or what insiders tag as a “gig”. Hence, we are seeing the arrival of the 21st century Gig Economy. Nearly 1 in 3 workers, blue or white collar, are independents or freelancers. That number is expected to grow to 50% over the next decade.

We live in a time of constant change which must become part of our DNA to win on the world stage of business competition. Understanding the blended workforce of the 21st Century Gig Economy is the first step. Changing the structure of and organization and reinventing the leadership skills necessary to lead this change is the real challenge.

Save this product for later
Display prices in: USD
bottom of page